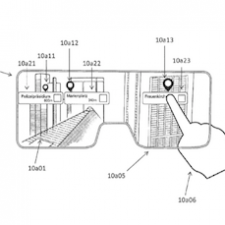 Apple has filed a patent that amounts to AR glasses working in tandem with iPhone or iPad, much as we all expected...

The United States Patent Application has the snappy title, ‘Method For Representing Points Of Interest In A View Of A Real Environment On A Mobile Device And Mobile Device Therefor’ and was filed on the 5th April this year, as spotted by Patently Apple when it was published last week. We’ve picked out the highlights from the 132-point document:

Apple calls this, ‘A video-see-through device’ that can represent points of interest in a view of a real environment using a semi-transparent screen, such as a spectacle or glasses with a camera that captures a view equivalent to the user’s eyes. The user then sees the real world, overlaid with virtual information that Apple says, ‘Can be any type of visually perceivable data such as objects, texts, drawings, and videos’.

Typical use cases suggested range from information about large landmarks such as buildings, right down to individual control surfaces in a car.

The patent notes that touch screen interfaces may not be ideal for AR, as the user’s finger could occlude the object of interest. Instead, users interact with virtual objects through an image position of their finger captured by the camera. The patent specifically states that, “This embodiment is particularly useful when using a head-mounted display comprising the camera and the screen”.

The details on how the camera will know where and what the user is looking at are quite varied and it seems Apple is planning to implement a range of data gathering techniques, depending on location. The ‘camera pose relative to the real environment’ may be determined using location or orientation sensors including GPS, compass, gravity sensors, and indoor positioning system based using anchors, as well as optical, radio, and acoustic technologies.

What Do Patents Make?

Patents don’t necessarily mean products – in 2008 for instance, Apple filed a VR ‘goggle system' that never reached market - but this most recent AR patent seems creditable and a tantalising glimpse of the AR future that may be coming out of Cupertino.

Apple IS Working On AR: Confirmed!