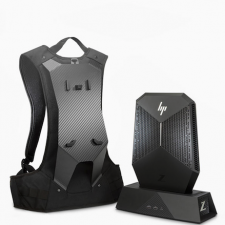 HP has just revealed what it claims to be, ‘The most powerful wearable VR PC ever created’, the HP Z VR Backpack PC.

Although not yet released, the Z VR will be the first PC on the market to feature nVidia’s Quadro P5200 GPU with 16GB of memory, accompanied by an Intel Core i7 vPro CPU. Supporting two 4K displays, the hardware has all the connections you might expect – including USB 2.0 and 3.0 – as well as Miracast wireless display connectivity for viewing the virtual world on an external display.

Aimed at professional users, the hardware also comes with hot-swappable batteries and a Z VR Dock that enables users to transition from backpack to desktop form factors. HP says the Z VR is capable of running HTC Vive BE or the HP Windows Mixed Reality Headset, with no mention of Oculus Rift.

We had thought with the advent of wireless add-ons – see here and here - that the days of backpack PCs were numbered, but it seems nobody told the likes of HP and ZOTAC.

No price has yet been set, but you can sign up to be notified when the HP Z VR Backpack PC is available here.