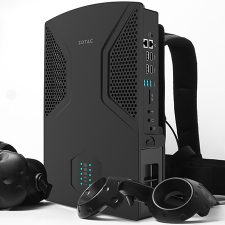 ZOTAC has announced its VR GO backpack PC , featuring NVIDIA’s GeForce GTX 1070 GPU and a quad-core Intel CPU. Designed for VR consumers, it also has a hot-swappable battery to keep you in the game.

As a wearable PC, the VR GO is much smaller than an ordinary PC, but its specs will allow customers to also use it as a desktop PC. To simplify cable management during a backpack VR session, one side of the VR GO is dedicated to VR ports with one HDMI output, two USB 3.0 ports and one power connector. The other side has the ports you’d expect to find on a regular desktop PC; there are three additional USB 3.0/3.1 Type-A connectors, an SD card reader, four additional display outputs (HDMI/DP) and two 3.5 mm audio jacks.

ZOTAC has yet to set a release date for the VR GO beyond sometime this Autumn.

You can read more about the rise of backpack PCs in our feature.