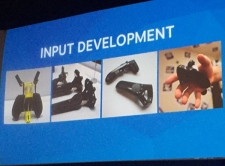 Steam Dev Days is a chance for developers to see what’s in the pipeline, but it seems the timing just ahead of Oculus Touch's 6th December release– and right after pre-orders opened - was too much of a PR blocking run for Valve to pass up. They used Dev Days to unveil a completely new controller that wraps around the hand, featuring no buttons other than a single trigger. Boy, we hope this isn’t another Apple single button mouse style misfire!

Attending developers, Robert Merki and Eva Hoerth both shared pictures of the announcement via their Twitter feeds. Hoerth also showed the hardware close up, along with her enthusiastic reactions to trying it for herself.

We love the existing Vive ‘wands’, but Oculus’ forthcoming Touch is a significant step up and gives the advantage to the Rift when it comes to control. Whether Valve’s new controllers are a direct response to their competitor’s hardware, or have always been part of their plans for the platform’s development, we can’t wait to try them for ourselves.