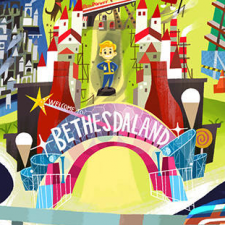 The long-awaited Fallout 4 VR game gets a release month, while Doom VFR is revealed as a full standalone title.

Bethesda Softworks has announced that Fallout 4 VR will be released for HTC Vive this October. The famed Maryland developers hosted a pre-E3 event this morning/yesterday - depending on your timezone – inviting E3 attendees and livestreamers to join them for a quick visit to Bethesdaland.

We already knew that the studio has been working on bringing the full Fallout 4 game to VR, but now we know there are only four months to go until Vive gets this bonafide AAA title in its library.

John Carmack stated his intentions to bring VR to Doom as far back as 2012, but since then, all we’ve heard is that there will be ‘some Doom VR content’. Until now.

At the same pre-E3 event, Bethesda announced that Doom VFR will be a full standalone title for Vive and PS VR. While details are thin on the ground, you can see from the video below that the game uses teleport for locomotion. Doom VFR will release later this year.