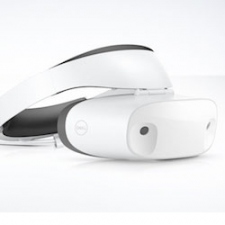 Dell is showing its version of the Windows Mixed Reality Headset at Computex this week. Last seen under glass as an early prototype at CES in January, delegates can now see the evolved design for themselves.

The headset features a flip-up visor to help with transitions from virtual world back to real world, replaceable head and face cushions and thumbwheel band adjustment for personalised fit. The weight distribution has been designed to take pressure off the nose and cheeks.

Dell says that the HMD uses, ‘The same technology used in the Microsoft HoloLens, with extra functionality. This includes inside-out tracking, with the headset itself able to scan your surroundings instead of satellite emitters positioned inside the room.’ Dell also claims, ‘Platform-agnostic communication, with the possibility of users interacting with owners of different MR headset brands’.

We’re told that the Dell headset ‘will be priced competitively’ and should run on more mainstream PCs to reduce the barrier to entry on grounds of cost. Pre-orders will open ‘this holiday’.

If you’re at Computex and want to check out Dell’s WMR, it’s on show at both the Dell and Microsoft booths.