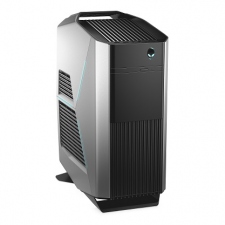 How could we refuse when Dell asked us if we wanted to try out their top of the range Alienware Aurora mid-tower PC that had been designed for VR? We were happy to find room in our workspace for a couple of weeks to see if the Area 51 inspired hardware was up to the task.

In short, it is – and then some. It breezed through some of the most demanding games we had on hand without so much as a hiccough and only paused to draw breath when we ran ambitious and unoptimised work-in-progress code that’s enough to bring less powerful set-ups to their knees.

That unflappable performance is down to the winning CPU and GPU combo of an Intel Core i7-6700 with an NVIDIA GeForce GTX 1070, backed up by eight GB of DDR4 RAM. The Aurora also features factory-overclocked CPUs with all four CPU cores on K-series processors using Advanced CPU Liquid Cooling and preset overclocking BIOS profiles. VR rigs run hot, so we were impressed to see that Dell had thought about this, with internal arrangement and fan positioning that delivers ambient air towards the priority components with exhausts at the top and rear of the system.

As a mid-tower desktop, the Aurora measures 212mm x 472.54mm x 360.5mm (WxHxD) and weighs in at 14.819Kg. It houses a MicroATX motherboard and Dell claims that, “It’s the first of its kind to offer tool-less upgrades to graphics cards, hard drives and memory meaning easy upgradeability for the next wave of VR.”

The styling is... different. It might be a bit too ‘gamer’ for some with all its odd angles and edges, but at least you can’t accuse it of blending in with the crowd. The case also has customisable lighting if you like that sort of thing...

With a price tag of £1,749, it’s reassuring to note that not only is the Aurora ready for today’s Oculus VR requirements, but Dell assures us that the system, “Supports higher performance configurations for more demanding VR of tomorrow”. Of course, you could build a similar system at a lower cost, but the Aurora impresses as an out of the box solution.

Of course, we don’t spend ALL our time in VR and there are times when we find ourselves sitting in front of a monitor, whether that’s for work or play. With this in mind, the Aurora has been tested and benchmarked at UHD 4K resolutions in both games and synthetic benchmarks. In fact, Dell informs us that it’s capable of running 12k, or three separate 4K displays. Sadly, we lacked the hardware to test that claim...

To put the PC through its paces on a screen though, Dell was kind enough to also send us the Dell 27 Monitor S2716DG for a couple of weeks. Featuring G-Sync, a refresh rate of 165Hz and a one millisecond response in Quad High Definition (QHD) resolution, this monitor can chuck out four times the definition of standard 720p HD – or 3.68 million pixels for anyone who’s counting.

And the results were, quite simply, stunning. At a retail price of £830, this is overkill for Word or Excel, but the Dell 27 brought life, depth and vibrancy to our desktop gaming. Extreme whites and blacks were excellent, with no noticeable motion blur on fast action. It didn’t improve our high scores or lap times, but it did improve how much we enjoyed playing games on a conventional flatscreen again.

Physically, the S2716DG feels solid enough and it’s easy to get the screen into the right position with tilt, pivot, swivel and height adjustable features. But like most users, we didn’t move the screen once we’d found the sweet spot.

It isn’t all good news though; this is one expensive monitor – especially given that it’s neither widescreen, nor curved. We’re the first to bypass monitor speakers and connect directly to our audio system, but the S2716DG didn’t even give us a choice, as there are no speakers.

That’s not a deal breaker, but with a screen this impressive, you’ll want to hook everything up to it, if you’re anything like us. But with one single HDMI socket, that means frequently plugging and unplugging cables or investing further in an external HDMI switch and that seems like an oversight at this price point to us.

But we could easily forgive these minor quibbles when the S2716DG is just so plain brilliant in use. Games looked crisper and sharper and the whole experience just felt more ‘modern’. Sending the S2716DG back and going back to our everyday Full HD screens felt like a real step backwards...