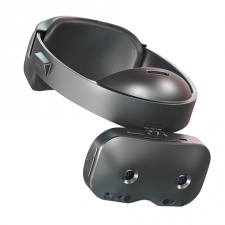 Last month, we brought you news of the upcoming Kickstarter campaign for an ambitious new mixed reality headset that offers both AR and VR functionality; the Lynx R-1.

The Kickstarter opened two days ago and company founder Stan Larroque has now confirmed that the French firm reached its funding goal of 300k€ in the first 15 hours. In Sterling, the current total pledged stands at £335,281, more than £80,000 over the £255,222 goal.

Larroque promises in an online update that, "October is going to be filled with demos and updates," going on to say that, "Our team is motivated like never to bring you our absolute best in terms of hardware and experiences across the Mixed Reality spectrum".