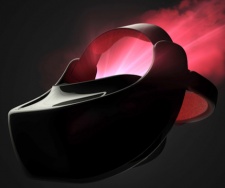 HTC has announced that it is to release a standalone VR headset for the Chinese market. Powered by the Qualcomm Snapdragon 835, content will be delivered by Viveport.

The Taiwanese company describes the hardware as, ‘The world's most immersive VR without the cables’ and, ‘The revolutionary standalone VR headset that delivers unparalleled VR experience’. The all-in-one unit has been designed to be easy to use and carry, lightweight and portable. The product tagline is, ‘No Phone. No PC. Standalone VR.’

The news comes out of the ongoing Chinajoy 2017 event in Shanghai.

Alvin W. Graylin, China Regional President of Vive said, “China is the leading mobile market in the world today, and has the momentum to lead the global VR market as well. Partnering with Qualcomm to deliver an easy to use and more affordable Vive VR system will enable us to make premium standalone VR widely accessible to the masses in China.”

Despite looking identical, this is not the standalone headset that was announced at May’s Google IO event, but is a new model specifically for the China market, according to VRFocus.

If you want to find out more or register to take part in standalone Vive development, with early access to developer hardware, click here.