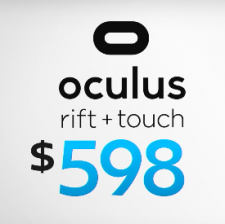 Oculus has reduced the price of Rift and Touch by a combined $200, bringing the total price down to $598. Rift alone is now $499, Touch is $99, and additional Oculus Sensors are $59 each. The news was announced by Brendan Iribe, CEO at Oculus, during Epic Games’ keynote at GDC.

The price drop is in response to both customer surveys and market trends, as console and mobile VR significantly outsells PC VR. In a blog post, Jason Rubin, VP Content at Oculus said, “Bringing the higher quality of PC VR toward these lower price points is an obvious win for both consumers and PC VR. This price drop was as inevitable as it is beneficial. This is how the technology business works.”

Sales figures show that Rift is trailing behind competitors Vive and even further behind last-to-the-party PS VR. With third party Microsoft headsets launching soon, this price reduction comes at the right time for Oculus.

Rubin said, “We believe this lower entry price will attract consumers to PC VR at a faster pace. This is universally good for the entire community, but especially for developers. A larger userbase means higher potential sales, easier player matching, better communities, and results in the ability to invest more in titles.”

This is great news for anyone already active in VR, but Rubin expects the lower price point to remove one of the main barriers to entry and attract more consumers – which will enable more expensive projects to become viable. He said, “This increased investment means better software which in turn brings more consumers. This virtuous cycle is the fuel that can launch PC VR.”