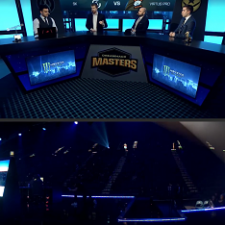 While SLIVER.tv’s virtual camera array technology rendered a fully immersive 360° in-world experience placing the viewer inside the game in VR, Nokia deployed its OZO 3D 360° VR live-action cameras to capture the excitement of fans inside the MGM Grand Arena. Tarif Sayed, Head of VR Technologies at Nokia said, “Virtual Reality allows us to explore a fantasy world; immersing people in experiences they could never engage with before and this is especially true with eSports. Working with SLIVER.tv on the hybrid reality livestream for DreamHack transported fans into both the game and the event in a completely, new and unique way that takes eSports to a brand new level.”

Mitch Liu, co-founder and CEO of SLIVER.tv, said: “We were thrilled to work with Nokia and its award winning professional OZO cameras for our DreamHack live-action production. The dual 360° VR live streams truly pushed the boundaries of today’s video technologies, and we successfully created an unique hybrid reality experience to esports viewers worldwide. This is a first step towards our mission to transform the interactive esports entertainment industry.”

To watch live re-streams and highlights from DreamHack Masters Las Vegas, visit the SLIVER.tv website or download the Android and iOS apps to view in 360° video and in Google Cardboard. You can also download the Samsung GearVR, Oculus Rift and HTC Vive apps to watch in full VR.

Focal Point: What Will It Take For Competitive VR To Blow Up In The Same Way That eSports Have?