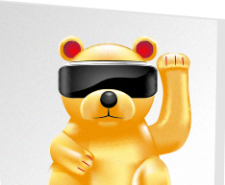 The VR NOW Awards 2016 winners were announced last night in Berlin. Judged by an expert jury exclusively dedicated to VR business, new technologies and innovative content creation, nominees were entered into four award categories: The VR Grand Prize, given to the best virtual reality project of the year, based on overall quality and innovation, selected from nominees in all other categories. The VR Tech Award, for the most technically advanced VR projects, tools, services, hardware and techniques. The VR Business Award, for the best business use of VR demonstrating the marketing or business power of VR. And finally, the VR Art Award for the most outstanding artistic, creative, and exploratory VR experience.

Crytek's The Climb, the world’s first climbing game developed exclusively for VR, took the most prestigious award of the bunch, the Grand Prize. The experience challenges Rift users to scale new heights in exotic locations from the comfort of their own homes. The Climb has been described as ‘awesome’ and even ‘scary’ by real-life climbers after comparing the experience to the real thing.

Immersive Deck is a real-time Holodeck based on a multiuser concept. Using Illusion Walk’s ‘Triple-Track’ software, Immersive Deck fuses existing motion capture technology with high-end real-time rendering. The company aims to increase the scale of VR drastically with their technology, from local-multiplayer gaming to walkable VR-showrooms or virtual training scenarios. The VR NOW Tech Award winner is currently in beta, those wishing to try it out can sign up here.

HERE Next Generation Automotive Services was crowned as VR Business Award winner for its use of VR. During the Paris Motor Show, HERE created a VR experience that placed viewers in Frankfurt, where they were shown how data travels to the Cloud. Holger Storm, Senior Creative Technologist at HERE and creator of the VR experience said, “The advantage of VR is that you can tell a story that’s been told before, but in different, interesting way. So, I could show you the same numbers used in the demonstration in a regular document, but it’s not every impressive. However, when you’re in the middle of a city, seeing thousands of data points being collected and travelling to the Cloud, its compelling and gives a sense of scale.”

The hilarious, dark and twisted experience that is Accounting was given the VR Art Award. Free for Vive users through Steam, the game will do nothing for those looking to learn about actual accountancy. Instead, players will experience a comedic, bizarre journey through beautifully designed worlds.