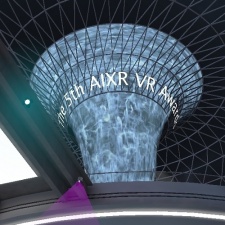 Tonight saw the fifth annual edition of the VR Awards by AIXR, celebrating the XR pioneers that push the medium we all love forwards.

Also streamed to pancake media, the awards were presented live in Altspace and it was a great event, with a real atmosphere of celebration that felt so much more like being part of something instead of just watching a YouTube stream. (Full disclosure - we're media partners and happy to see how the awards have gone from strength to strength every year, but as you'll soon see, that doesn't elevate them beyond reproach.)

The live awards room that I attended - there were multiple instances - was notable for the generous and very receptive audience that was happy to share applause and heart emojis with the announcement of every nominee and winner. Okay, the occasion lacked the thrill of live applause, but it was kinda cool hearing the bursting bubbles of popping emojis all around.

It's exactly that sense of presence that embodies the VR experience.

Not only could I overhear nearby conversations - atmospheric, but blockable if irritating - but from my vantage point, I turned around at one point, saw some spectators right at the back, waved at them and they waved back. We were there together - that's pretty cool.

There may have been a lack of attendees to accept some of the awards - plus some audio issues too - but I experienced a great sense of presence when the winners congratulated one another in the crowd when announced.

And it's exactly that sense of presence that embodies the VR experience, as we all know. I met and talked with multiple attendees both before and after the awards themselves - and of course, it left a far more lasting impression than a simple trade of text messages.

Kudos to AIXR for striving to further the very same medium they champion.

As someone that has worked in events, I know all too well just how much preparation goes into a single night, let alone how disheartening it is when last-minute gremlins strike. But it can't go unremarked that actually getting into a live awards room tonight was a painful experience that required multiple restarts, lobbies and portals. It was… not fun.

Getting into an instance of the awards hall was like being on dial-up internet used to be, replete with false starts and frustrations aplenty. But just look at how far the internet has come since those days and realise how much immersive experiences will fast improve.

I overheard many comments in various lobbies from paying customers that reaffirm my opinion that an online event for many participants is not yet ready for prime time in XR - let alone the burgeoning metaverse that is to come. There's a lot of work yet to be done, but kudos to AIXR for striving to further the very same medium they champion.

A live full-body representation of an actual human being. This is the future….

A real highlight of the night was the winner of the lifetime achievement award - as we reported here - Tom Furness live holoporting into proceedings. While the presenters and attendees alike were restricted to the stylised cartoon kind of avatars to which we've all become reluctantly accustomed, Furness was represented by a representation of his actual self.

Complete with beige suit and bright tie, a cynic might say that the digitised result looked like a laser-disc character, but that would be to forget the fact that this is a live full-body representation of an actual human being. Not only did his avatar have feet, but they seemed to rest upon the digital stage itself. This is the future…

With over 128 international nominations, 98 finalists went before a panel of over 70 expert judges, undergoing a rigorous judging process. With almost 10,000 public votes cast across two categories, the community came out in force to show their appreciation for their favourite VR Social Influencer of the Year - and for the first time ever, the VR Game of the Year category too.

The future is bright and bold for Virtual Reality.

The future is bright

Daniel Colaianni AIXR CEO said, “We were delighted to celebrate the year’s achievements within the metaverse once more and [our] amazing team created a one-of-a-kind virtual journey through the history of the VR Awards and the founders.

Colaianni went on to say that, “The future is bright and bold for Virtual Reality - and I am immensely proud to stand on the precipice of something so fundamentally life-changing to the way we work, live and grow”.

On a personal note, kudos to Altverse's avatar builder that got yours truly closer to an actual representation of myself than any other profiler, whether in VR or flat-screen. Of course, this seems like a throwaway comment now, but upon such whimsy may the future of the metaverse be built...