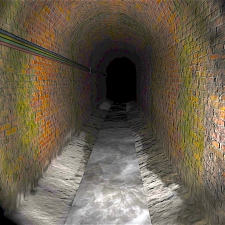 This launch comes after The Guardian's award-winning first virtual reality project '6x9 - a virtual experience of solitary confinement', which was released earlier this year. Francesca Panetta, executive editor, Virtual Reality at Guardian News and Media said, "The creation of Underworld, along with our new in-house VR team, cement the Guardian's commitment to digital innovation in journalism and working with emerging technologies to create immersive and impactful storytelling".

Underworld invites users to explore the vast subterranean labyrinth of London's Victorian sewers. Guided by urban explorer Bradley Garrett, the journey begins at the old river Fleet, one of London's lost waterways. The journey continues through the blood sewers under Smithfield meat market and down to the floodgates of the River Thames. The journey later hits a split in the tunnels where the user can choose either the left or right tunnel, with a different story based on their choice.

Underworld was created by the Guardian’s in-house VR team and The Mill. The project was released for free on the Google Play store on the 10th of November 2016; the next five VR projects will be released quarterly.