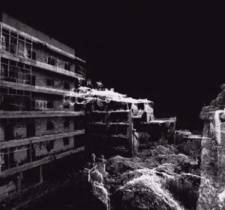 The Guardian newspaper has launched a new 360 video for Google Cardboard, Limbo. The animated documentary examines the plight of asylum seekers in Britain, based on interviews with people from 12 countries, as well as immigration lawyers and barristers. It is their voices users hear as the refugees guide viewers through the experience of arriving in an unfamiliar city.

Guardian VR wanted to capture the sense of isolation that many interviewees spoke about, caught between two lives, that of the place they left and the new one they hope to build . The piece was made in collaboration with ScanLAB Projects, which specialises in creating digital replicas of environments using innovative 3D scanning technology. The Guardian says, ‘The resulting monochrome sketch-like aesthetic has the quality of a dream or nightmare where worlds are transparent and fragmented.’

Limbo is available now for Google Cardboard via YouTube or the Guardian VR app from the Google Play Store. It will be also be available soon on Gear VR.