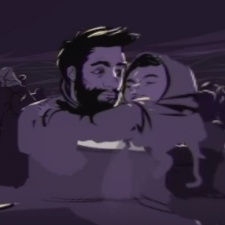 The Guardian newspaper has launched its latest VR project, Sea Prayer. The project marks the second anniversary of the death of Alan Kurdi, the three-year-old Syrian boy who drowned whilst attempting to reach Greece in 2015.

Written by UNHCR Goodwill Ambassador and acclaimed author Khaled Hosseini (The Kite Runner; A Thousand Splendid Suns; And the Mountains Echoed), Sea Prayer is narrated by BAFTA Award-winning actor, Adeel Akhtar, as he reads an imagined letter from a Syrian father to his son lying asleep on his lap, on the eve making the sea crossing to Europe to see refuge and safety.

Author Khaled Hosseini said, “I am a father of two. My immediate reaction upon seeing the photo of little Alan’s body lying limp on a Turkish beach was how unimaginably bludgeoning the loss was to his father. I am not, thanks to random good fortune, one of the countless fathers in Syria to have buried a son or daughter. But I know a father’s feral need to protect his children, and writing Sea Prayer, I knew this was my truest entry point.

“As the drownings in the Mediterranean Sea sadly continue, I hope that this collaboration helps keep alive the memory of Alan Kurdi, and that it serves as reminder of the unfathomable desperation that forces families to risk all they have in search of hope and safety on another shore, across the waters. This is a choice that no one, and certainly not a father, makes lightly. We all have an individual duty to let our Governments know that we stand #WithRefugees and that we welcome the urgent expansion of alternative and safe pathways for those in need of international protection.”

Francesca Panetta, Executive Editor, Virtual Reality at Guardian News & Media said, “We’re delighted to bring his incredibly sensitive imaging of a letter from a Syrian father to his son to life. Using Tilt Brush technology for the first time in this way, Sea Prayer explores a new immersive form - 360 illustrated narratives. We have worked with the best artists in this field to create a story that truly unfolds around the viewer, providing them with insight into the experiences that many migrants are forced to endure when making a dangerous escape from war.”

The project is a collaboration between the Guardian’s in-house VR team and VR artist Liz Edwards who said, “Working on Sea Prayer has been an amazing experience. It's an absolute honour to bring Khaled's writing to life in 3D with Tilt Brush - I hope I've done it, the city and the people justice."