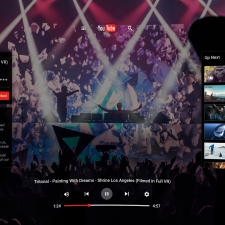 YouTube has launched its new app, YouTubeVR, which has been built from the ground up and optimised for VR. Appearing first on Google’s Daydream VR platform, the new app will be available on Daydream-ready Pixel phones using the newly released mobile VR headset, Daydream View.

Some examples of VR experiences given by YouTube include spending time with beauty blogger Meredith Forster, joining Tastemade for VR cooking videos and watching breaking news in VR from HuffPost RYOT.

YoutubeVR is designed to turn every YouTube video into a VR experience, not just 360 videos. Standard videos are shown on a virtual movie screen in a new theatre mode, where users can browse in a similar way to the mobile and desktop versions. Further, the app holds familiar features like voice search, especially handy during a VR session, as well as logins so you can watch videos from your subscriptions as normal.

YouTube told us that they are heavily focused on creating new possibilities for both viewers and content creators through VR: “We want to continue to provide you with new ways to engage with the world and with your community, and we believe VR will play an important role in the future of storytelling. That’s why we’re committed to giving creators the space and resources they need to learn about, experiment with, and create VR video.”