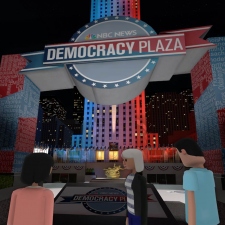 Last night, the first American Presidential Debate between Democratic nominee Hillary Clinton and Republican nominee Donald Trump was live streamed in Virtual Reality. This is the first time the event has used this technology.

NBC News launched the Virtual Democracy Plaza in collaboration with AltspaceVR earlier this month, ahead of the first debate yesterday. The programme runs to include election night, with debate watch parties, live Q&A discussions with political experts, political comedy shows, and more.

You can join the Virtual Democracy Plaza using the AltspaceVR app on the Oculus Rift, HTC Vive or Samsung Gear VR. The next debate is on 26th September.