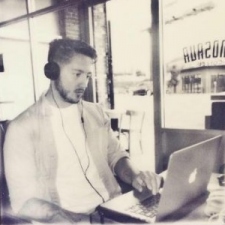 Ed Robles is the writer and director of episodic VR experience, Dispatch. As part of the Here Be Dragons  team, he’s worked on previous VR experiences including Catatonic and the award-winning Clouds Over Sidra.

Tell us about your company's background. How did Here Be Dragons get started, what are its previous projects, and what is its mission and vision?

Here Be Dragons has been in the VR game for about three years, now. It was started as a production partnership between Patrick Milling-Smith and Chris Milk, both equally eager to create and define great content from word go. As far as our mission statement goes, we’re trying to make incredible content and tell compelling stories using any and all resources. That includes VR, AR, and Mixed Reality tools. As president of the company and founding partner of Smuggler, Patrick sets a high bar of excellence for Dragons. That pursuit of great work is my mission statement, at least.

I’ve fallen backwards into a series of privileged and lucky circumstances that have shaped my perception of the future of storytelling.

How did you get started in VR? Your background is in scriptwriting I think?

My formal education is in cinematography, but I’ve always wanted to direct. I interned for Smuggler about five years ago, and it just so happened Guy Shelmerdine’s assistant was about to leave. He gave me a shot, and I ended up working for him for about two-and-a-half years.

Guy, as I’m sure you know, has done excellent work pushing the boundaries of what VR can do - specifically within the horror genre. I wrote a lot for and with Guy, and that constant everyday writing really shaped my voice and interests.

I joined Dragons right as they were in post production on Clouds Over Sidra. They brought me on to help shape the doc. Back then, no one really knew how VR worked as a storytelling tool - least of all, me. I was fortunate enough to work directly with Chris Milk, Sam Storr, Gabo Arora, and Ari Palitz on that one. After that, I was made staff at Dragons, and it’s been that way ever since.

So really, I’ve fallen backwards into a series of privileged and lucky circumstances that have shaped my perception of the future of storytelling.

How did you come up with the idea for Dispatch? What was the inspiration?

I made a short film in college about a police dispatcher, so this core concept has been lingering in my brain for a while.

The initial attraction was to the dispatcher’s helplessness. Here we have a character who is an intermediary. the go-between. The dispatcher can’t reach through the phone and save anyone. But the danger of the call, the heart-pounding adrenaline of it all, it feels incredibly real and present. It’s like being thrust into a boxing ring with your hands tied behind your back, nothing except your wits will save you. And so dispatchers have to be clever, they have to be poised, in control, always listening, assessing. It’s a psychological challenge for them, whereas being a cop is physical as well as psychological.

I've also always loved the fledgling detective - the character who doesn’t really know what he/she is doing, and so they have to learn on the fly. The lead character of Dispatch, Ted, has a keen ear and a big heart, but his own personal shortcomings have formed this inner rage that he must satisfy or overcome, or it’ll destroy him.

The visual world of Dispatch owes as much to your imagination as it does to the aesthetic we created.

Its style is very distinctive. Obviously, it's not naturalistic, you're not creating a real-looking world here. But it is immersive. What artistic choices went into that? How did you know this was going to work in VR?

The world of Dispatch needed to adhere to a strict minimalist aesthetic in order for the story to work. The central conceit of the experience is that Ted sees with sound. Therefore, every sound or voice would trigger an image. When you take into account Ted doesn’t know any of the callers, nor has he been to any of the locations, it stands to reason he wouldn’t have a complete picture of the world he’s hearing. Once you marry yourself to that ruleset, the rest is straightforward.

I’m very attracted to the work of Don Hertzfeldt, who I think is one of our generation’s most innovative storytellers. Don’s work plays on the notion that less will always be more. Take cartoons for example. If someone were to show you a drawing of a finely detailed person, it would feel like an other. somebody. But if someone shows you a stick figure, it could be anybody. It could be your loved one. It could be you. Dispatch operates on this same premise: when we reduce identifying details, the audience fills in the gaps. The visual world of Dispatch owes as much to your imagination as it does to the aesthetic we created.

I didn’t immediately know it was going to work in VR, because we’re telling a very aggressive story. Aggressive as in complex, unrelenting. The tit-for-tat dialogue exchanges are fast, sometimes as fast as they might be in a movie. There have been other experiences to play with minimalism and sight inspired by sound, most notably the incredible Notes on Blindness. But I hadn’t seen anyone try to tell a layered unrelenting narrative in that style. Oculus, our partners on Dispatch, saw the potential immediately and gave us the time and leeway to iterate until we got it right. The experiences team at Oculus were incredibly supportive, knowledgeable, and enthusiastic all along the way. I can’t say enough good things about the team.

(VR is) a new tool to pierce at the darkness surrounding universal human truths.

Does that put VR on a pedestal above film or TV? Absolutely not. I have a supreme and unwavering love for the traditional visual mediums. I can still stare at paintings for eons, and listen to songs on repeat. VR is just another toolset for us to explore and what makes it so exciting is how many dark spots on the map there currently are. We’re still exploring, but we’re also getting to a place where auteurs are starting to emerge. Storytellers have honed their craft for a few years now, and some of the experiences I’m seeing these days are refined works of art.

By the numbers, VR is doing better than expected.

What are the challenges of VR?

The audience is never as big as I’d like it to be, but we’re growing in promising ways. By the numbers, VR is doing better than expected. More established filmmakers and storytellers are starting to get the itch, and we’re seeing the first fruits of that curiosity now.

What are the advantages of episodic storytelling over one long feature?

Dispatch was my first attempt at telling a story episodically. I’m hooked. It’s incredible what episodic storytelling can do in relationship to pace, rhythm, and propulsion. It truly is a journey. I hope to craft more episodic work in the future, but I also hold dearly the power of one long feature. The two hour format has worked brilliantly for decades. I believe both have the power to take viewers on a journey, and to incite change and positive growth within audiences.

You chose to debut at a film festival. Why was that important – and what was the reception like in that environment?

Being a part of the Venice Film Festival’s first-ever VR competition was an honor that I won’t soon forget. The beauty of the festival, the intoxication of Italy, and the respect paid to VR was overwhelming. I can only speak to the personal importance of debuting at a film festival, and to that I will say, it felt like a ratification of all the hard work the team had put in. To be recognised by such a body of critics in our developing medium signaled to me that VR has arrived.

The voice acting is significant. Talk us through the casting process finding the right person for your lead guy? What did Martin Starr, in particular, bring to the part?

The team understood voice casting would be no easy task. The voices carry the suspense, the drama, and the emotion of Dispatch. Martin brought a level of professionalism and intense inquiry to the role. He asked a thousand questions, some of which I had answers for, some of which I didn’t. But over time he and I found answers to every question together. He really took the reins and created layers to Ted that needed to be there. Sometimes placid, sometimes tense, sometimes overly emotional, sometimes withdrawn - he hit all the right notes at the right time.

I hope VR remains a platform for bold and inventive storytelling.

What can we expect from future episodes?

Dispatch is a four-part series, and we only showed the first two at VR Days. [See our show report here] Episodes 3 and 4 conclude the story of Ted the dispatcher. The first episode will be free, and following episodes can be purchased as a bundle. We made Dispatch in partnership with Oculus.

What hopes (and maybe fears) do you have for VR as a platform in the future?

I’m developing a number of projects. Each project aims to push the boundaries of aggressive, or complex, storytelling in VR. I hope VR remains a platform for bold and inventive storytelling.