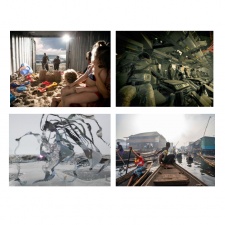 The BFI London Film Festival has announced the lineup for LFF Expanded, the festival’s immersive art and XR strand, which will run from October 6th to 17th this year. Presented in partnership with the National Theatre, this year’s hybrid programme features works from creators bringing stories and experiences to life through immersive technologies including interactive VR, 360 films, augmented reality, mixed reality and live immersive performance.

This year, LFF Expanded will feature 18 projects (eight of which have lead artists that identify as women and six as ethnically diverse) working in immersive media and representing 13 countries (UK, USA, France, South Africa, Taiwan, Finland, Latvia, Sweden, Israel, Nigeria, Canada, Denmark and Luxembourg). The programme features nine works from the UK and a total of six world premieres.

All exhibits will be presented across multiple venues in-person, while a selection of works will be available online to audiences in the UK and internationally via the virtual exhibition space, The Expanse. The Festival will host an opening event in-person, featuring 15 projects from the programme, while a dedicated Immersive Art and XR Award will be announced at a ceremony on Sunday 17th October.

Ulrich Schrauth, BFI London Film Festival XR programmer said, “We are excited to present to our audiences this wide range of creators, artists and filmmakers from all over the world and share their incredible projects in specialised exhibitions and settings.

"This new strand is not about technology, it’s about the stories these creators want to share with us. Stories of cultural, social and political urgency, giving visitors the possibility to get completely immersed in a work of art and challenge their own perspectives on these important matters of our current times.”