Pay-off's Vision For The Future Of Location-Based VR 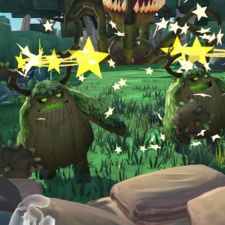 Pay-off Technologies was at Game Connection Europe last week, to demonstrate Monsterplants Vs Bowling. It's a fun VR game for one or two players, built with cooperation in mind, and intended to be played in a space from 5 to 20m².

Julien Millet and Fabien Bihour co-founded the firm and their plan is to build VR arcade-based activities. There is also the potential for home versions of Monsterplants Vs Bowling. The outfit may only be small, but what struck TheVirtualReport.biz is their determination, expressed through three rules they've set for themselves, and enshrined in a vision for the next three years.

"The future of entertainment will transition from a gaming industry to an experience industry and we will be at the forefront of this revolution," President and co-founder Millet told us. And to do that, they have three axes around which they operate:

The team is also working on Robotic Asylum, "A replayable full VR game escape game (the murderer and the murder weapon would vary from one game to another)", which is planned for the end of Q2 2018. Two to four players will cooperate as they attempt to solve an investigation in a futuristic laboratory.

In addition, Millet outlined his '2020 vision' to us saying, "We believe that the 'experience industry' will emerge over the next three years. You'll go to a room that's 40m-squared with a few friends, and a Lord Of The Rings-style setting will appear. You'll have five minutes of training, to learn your character and spells. And then you and your friends will be in an adventure. You'll scream at each other to take down the big monster – when you're finished with the bad guy, you'll feel like you've done an epic thing together."