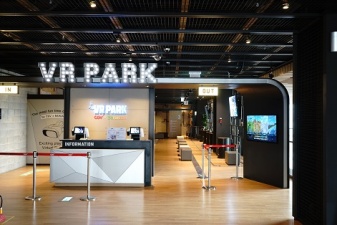 Kit for use in the home is just one aspect of the growing VR scene. There's also increasing interest in VR destinations, locations for hire or group play that echo the arcade scene of the 1980s.

NR Studio are famous in their South Korean home for the VR arcade location they run, VR PARK. The studio also publishes games and are working on a mobile VR title right now. We connected with NR Studio at the VR Connects event in London this January. To gain some insight into the popularity of the VR arcade scene, we spoke with Yeonwoo Park, a global manager from NR Studio.

TVR.biz: How popular is the VR arcade scene?

Yeonwoo Park: The VR arcade scene is emerging as a new entertainment form in Korea, but most VR arcades still run VR applications through Steam. VR PARK is the first VR arcade location which is operated with proper game licensing. VR PARK's interactive VR content is created by NR Studio to entertain and interest customers who don't have enough experience with VR.

Since we hope as many people as possible will try VR content so the VR market can grow, our games are easy to understand and enjoy. Several games have a multiplayer mode where people can get used to VR games by having fun and learning easily with their friends and family. We're happy to see customers with satisfied grins on their faces. We cannot address the exact number of customers, but we can see that VR PARK is full of people and buzzing on weekends.

What are the challenges of developing for an arcade? What sort of games work best in that context?

We have to consider all types of customers, so we're trying hard to make games comprehensible for people who don't play VR games or any other video games. We found out that employees helping customers all the time could harm the immersion so we are working on developing proper UI and instructions which can make it so that people don't require any help.

In the games, customers are prone to distraction because their eyes freely roam around the environment because they aren't directed properly so they miss some important action or moment. So we are focusing on making those moments smoother. In that context, Into The Rhythm, an immersive rhythm action game works best. People know how to play drums in the real world and the basic way is no different in the virtual world so it takes less times to get used to playing the game.

Is that the most popular game? What other games do people like most?

When we see customers' reactions to games, two games can be considered as the most popular. When it comes to the game itself, Into The Rhythm is the most popular one. Customers are captivated with its dynamic gameplay and fascinating songs. We can see long lines of people who are stomping their feet and nodding their heads to the rhythm.

On the other hand, customers are satisfied with Bubble Pop most for its multiplayer mode. Because of the characteristics of the place, couples visit VR PARK a lot and they are excited to play games together. Bubble Pop has a cooperative mode where one person captures pirates with bubble guns and the other pops them by shooting guns. Since each person has a different role, they talk to each other and laugh a lot during gameplay.

Where did your company start? When did you release your first VR arcade game?

We were founded in Korea in 2013 and developed mobile games until we launched our first VR game, James's Legacy on Gear VR. Ever since we discovered the possibilities of VR with that game, we have been concentrating on VR and AR games. We believe expanding the market is the first and most important step of our business, so we decided to offer our games through VR arcade locations. When VR PARK opened in December 2016, our first VR arcade games were released.

What do you think is the future of VR?

The future of VR will be beyond the reality with its optical experience. Mixed Reality, which is a combination of VR and AR, will be the ultimate future of VR.

What advice would you give to somebody developing in VR right now?

I think first-person view is not the only way for VR. Of course, first-person view could be effective in many ways but there are a lot of different ways to deliver interactive VR experiences. On top of real-like elements, developing imaginary experiences will attract people.

Tell us about your new mobile VR game. What is it called and what is the premise?

We have released one mobile VR game on Gear VR. By learning through that experience, we think the mobile VR market is not yet ready because of its scale. Now we concentrate on tethered VR (and potentially all-in-one VR).

The most anticipated game by ourselves is an escape game called Dive In: Secret that goes beyond the past/reality/future. In short, players are trapped in a cube and solve various puzzles in order to escape the cube. However, unlike existing escape games, our core concept is the multiplayer network competition. Also, apart from puzzles that everyone expects, our own unique action puzzles will give lots of fun. The scenario version is scheduled to be released in June 2017.

Apart from Into The Rhythm and Dive In: Secret, we are also preparing other projects and most of them will be launched between June and December 2017.

What are the challenges of developing mobile VR?

The tiny mobile VR market is the challenging point for developing mobile VR. However, as Google and Apple continue to develop their devices and improve their specifications, the market will grow. We are anticipating the effect of Daydream. We believe the market will grow explosively when the ideal phone’s created and users are found.

The current state of mobile VR is left behind in terms of performance, and depending on the phone model, unintentional dizziness can occur. Moreover, we have to consider the characteristics of the platform itself. The basic function of a cell phone is the phone call but it's still difficult to call and text during the VR experience. We have to deal with this kind of device's features.

What lessons have you learned from VR arcades that you're able to bring to the mobile VR experience?

We put Gear VR in the VR PARK so people can enjoy simple VR videos while they are waiting their turns for the main content. As we developed VR arcade games, we learned the difference between VR arcade games and mobile VR games. So it's fairly difficult to bring VR arcades to mobile VR. But we currently pay attention to the new devices which are combined with mobile HMD. We are working on how to utilise them for the VR arcade scene.

If you'd like to attend a VR Connects event to meet with the global VR industry, grab a ticket to our San Francisco conference now.

Pay-off's Vision For The Future Of Location-Based VR