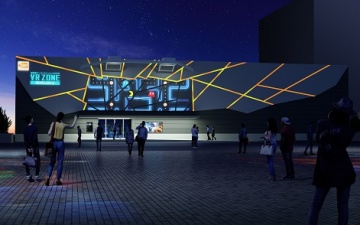 Bandai Namco has revealed its ambitious plans to bring VR to the general public through a chain of real world attractions worldwide. The first of these, VR Zone Shinjuku, opens on 14th July and will be the single biggest VR destination in Tokyo.

The site will host more than 15 VR experiences using HTC Vive, including Dragon Ball, Evangelion. Ghost in the Shell – and making his first appearance in VR: Super Mario, with Mario Kart Arcade GP VR. The facility will also offer non-VR activities, such as escape the room, shopping and dining.

Digital art group, NAKED, has developed projection mapping installations both inside and outside of the facility. The exterior will feature a projection of PAC-MAN among other images, while the inside will feature a Centre Tree, which is also an interface for the facility, allowing guests to interact with the building itself through touch.

According to Yoshiyasu Horiuchi, Executive Officer of the Amusement Business Unit at Bandai Namco, “VR Zone Shinjuku will be the flagship location for the next-generation of entertainment. A place where Bandai Namco carries out new challenges, delivers excitement and amazement to visitors from across the globe.”

Dedicated Hardware
VR Zone Shinjuku will feature dedicated VR arcade hardware for many of its experiences:

You can read more about Mario Kart Arcade VR here.