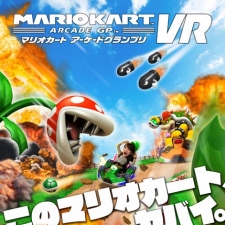 We’ll be honest; when we first heard rumours that much-loved franchise Mario Kart was coming to VR arcades, we imagined some kind of emulator and a PS VR in Cinematic mode, swiftly followed by a red shell lawsuit.

Imagine our surprise then, that not only has Nintendo licensed its flagship racer for VR, but the arcade in question is from none other than arcade legends, Bandai Namco with its pilot facility in Tokyo.

As we reported recently, VR Zone Shinjuku opens on 14th July, and one of its 15 VR experiences will be Mario Kart Arcade GP VR.

Details on Mario’s VR debut are thin on the ground, but we know that it’s a multiplayer experience for up to four people. Playable characters include bouncing brothers Mario and Luigi, as well as evil antagonists Bowser and Wario. We can’t be sure if that’s the full character roster, but looking closely at the nose of the real world rigs clearly shows the four unique icons, so don’t expect to put in any laps as everyone’s favourite green dinosaur, Yoshi.

The karts are controlled by physical steering wheels, which should make for a definite improvement over the Wii wheel’s floaty experience. Most interesting, however, is that players wear Vive Trackers on their wrists to perform arm tracking. Players raise their arm to prepare to launch an attack and the shell – or other projectile – is released following a throwing action.

If you want to play Mario Kart in VR next month, then your only choice is to head to Shinjuku, Tokyo. Since the VR Zone facility is just the first of a planned 20 locations worldwide, we hope to see moustachioed motorsport get a VR outing in other territories.

Looking further ahead, does this mean that we may see a domestic release for Mario Kart Arcade VR on HTC Vive? Given that Nintendo has openly said it has ‘a lot of interest’ in VR and is at least researching its own consumer VR hardware, we doubt it. That ‘Arcade’ in the title suggests that we won’t be drift boosting in our bedrooms anytime soon.

Nintendo IS Working On VR For Switch