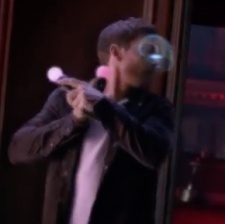 The only VR game to get its own spot in Sony’s Media Showcase at Paris Games Week was modern day FPS, Blood & Truth. The game sees a former soldier return to London where ‘things get complicated’, featuring a ton of gunplay and massive explosions. The story-driven game aims to deliver, “Your favourite parts of your favourite action movies”, according to design director, Ian Wright.

From Sony’s London Studio, maybe it’s no surprise that it reminded us its previous cockney gangster experience, The London Heist, which was featured on Sony’s VR Worlds collection of mini-games.

While the developers admit that experience felt like a demo, the forthcoming Blood & Truth retains the object interactions and shootouts, but the new game will, “Dial it up to 11”, expanding on the core offering with additions such as locomotion that will add a strategic element to the gameplay.

The trailer was set entirely within a casino/hotel, but the full game will feature a variety of locations. Director, Stuart Whyte, feels Blood & Truth portrays the potential for what’s to come from VR with, “Bigger, more blockbuster, titles that push the boundaries of what it is to be in VR”.

Watch the full trailer for yourself: