VR hardware shipments up, growth forecast to 28.6 million in 2025 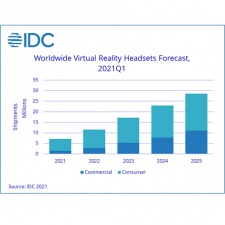 Global shipments of virtual reality headsets grew 52.4% year over year in the first quarter of 2021, according to new data from the International Data Corporation (IDC) Worldwide Quarterly Augmented and Virtual Reality Headset Tracker.

Standalone headsets accounted for the vast majority of shipments, capturing 82.7% share during the quarter, up from 50.5% in the first quarter of 2020.

IDC forecasts VR headset shipments to grow 28.9% year over year in 2021. However, the forecast reflects supply-side constraints as some vendors will struggle with component shortages during the year. The long-term outlook remains quite strong as global shipments are forecast to grow to 28.6 million in 2025 with a five-year Compound Annual Growth Rate (CAGR) of 41.4%.

"The commercial use cases for virtual reality continue to proliferate," said Tom Mainelli, group vice president, Device & Consumer Research at IDC. "As companies continue to plan for a future that encompasses a combination of both in-person and remote work, we see VR playing an increasingly important role in driving next-generation collaboration, training, and digital events."