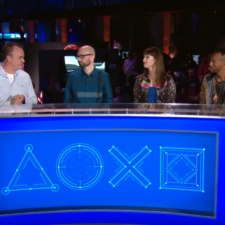 During the PlayStation Live pre-show for Sony’s pre-E3 Media Showcase (is that the pre-show pre-show, or the pre-pre-show?), came the announcement that Superhot is coming to PS VR this summer. We placed developers, Superhot Team, on our 25 Developers To Watch feature last year.

They also showed the reveal trailer for futuristic sports game, Sparc from CCP Games that will be out in Q3. We’ve already covered Sparc here if you want more info and to see the trailer.

And so to the Media Showcase itself. Other than a brief introduction from Shawn Layden, President and CEO of SIEA, the showcase presented us with trailer after trailer of PlayStation games including the likes of Uncharted The Lost Legacy, Days Gone and Call of Duty WWII.

Sony wrapped all its PS VR announcements into a series of sizzling showreels, led by the reveal for Skyrim VR – see here for more about that. In all, we were treated to five new games to look forward to from four third-party developers and we have some information and a trailer for each of the games, presented in the same order as the PlayStation Media Showcase.