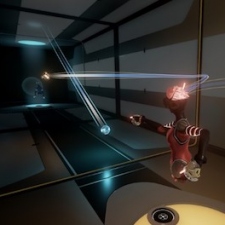 CCP Games has announced that its next game will come to PS VR in Q3 2017. Sparc is a skill-based, fast-paced and physical sport where players use Move controllers to throw projectiles at each other inside a sleek virtual arena, while defending themselves by dodging, blocking or deflecting incoming attacks from a live opponent. Players can compete against friends or use online matchmaking, and spectate ongoing matches in the freeform social Courtside.

CCP calls this a ‘first-of-its kind, full-body virtual sport’, but they might have missed the memo about Ready At Dawn’s more ambitious Echo Arena that launches on 20 July.

“We have been exploring various aspects of VR over the past four years and pushed into new, exciting territories,” said Hilmar Pétursson, CEO of CCP Games. “Out of one of those explorations, we found this amazing, central nervous system-unlocking experience that really feels like a solid next step towards the next generation of virtual reality experiences. As our first release outside of the EVE universe, I’m really looking forward to seeing how people react to this level of innovation.”