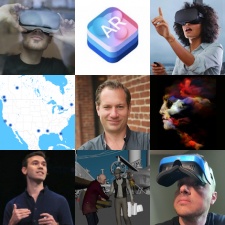 Forbes was ‘amazed’ by its early peek at the social VR, with Sansar VP Bjorn Laurin, and Jason Gholston, Product Director.

Head of Rift, Nate Mitchell, shares his ambition to make the Oculus ecosystem the “epicenter” of VR on PC and its involvement with OpenXR.

4) Why Is ARKit Better Than The Alternatives?

A look at the recent boom in AR demos with ARKit and an understandable explanation of how and why it works.

CEO Andrew Wilson says VR is an “unbelievable innovation” but it will take, “A couple of years before it is a mass market opportunity”.

6) Oculus: Standalone VR Won't Be As Good As Rift For At Least Two Years

7) Welcome To The Wonderful World Of Augmented Reality?

8) 8 Industries Being Disrupted By Virtual Reality

9) How Scientists Are Manipulating The Mind With VR

Three experiments from the University of Sussex’s Sackler Centre for Consciousness Science show how virtual reality can help us understand human consciousness.

Week That Was: 15th December

Week That Was: 8th December

Week That Was: 1st December