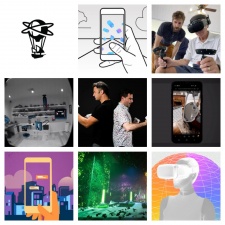 1) First Look At AR Gaming On The Oculus Quest 2

James Thomas leads a team at VCU’s Motor Control Lab who are developing immersive games to help those with trunk control impairments to get moving.

As two cities — Buffalo, N.Y., and Fairfax, Va. — embark on projects to implement augmented reality technology, questions arise on the effects the new tool will have in their communities.

5) Mixed Reality: How XR will change the LGBTQ+ experience forever

Queer creatives assemble! A virtual revolution is upon us…

LA-based VR gaming startup raises $7 million on top of their $1.5 million seed round

7) Can Virtual Reality Save the Planet?

Kristen French interviews Vanessa Keith, a registered architect and the principal of StudioTEKA

Creators and brands to build Augmented Reality experiences in minutes

9) The Metaverse is a Dystopian Nightmare. Let’s Build a Better Reality.