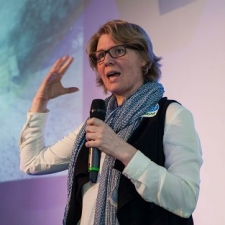 Christina Barleben, CEO and Creative Director at Thoughtfish GmbH is one of 50 world-class speakers appearing at VR Connects San Francisco 2017 on the 27th and 28th June. To hear her speak in person, book your ticket now!

A: I am the CEO and Creative Director of Thoughtfish, a company I founded in 2013 to create next-generation games and apps. We believe that smartphones are much more than just computers with small screens, and our projects seek to unify the vastness and diversity of the world at large with the intimacy of smart devices.

A: Though these fields are just taking their first steps into maturity, they are already producing unbelievable results. I love VR, AR, and MR, but AR resonates the most for me personally, because I believe it offers the best opportunity to create games and apps that work seamlessly with our daily lives.

A: For AR, the story of the past 12 months is Pokemon GO. Its success took everyone, even its creators, by surprise, and showed how much potential there is in games that can successfully unite smart devices with the real world.

A: While all three will continue to gain increasingly widespread interest among both consumers and investors, I believe interest and investment will grow fastest around AR, particularly in non-gaming sectors.

A: I look forward to opening up the conversation about AR, and challenging people to think beyond the reductionist “camera with overlay” model.

Don’t miss your chance to hear Barleben share her insights on what AR is all about and the future of the medium at VR Connects San Francisco. Her session is at 17:30 on the 28th June 2017. Book your ticket now!

I started out as a M&A/IPO lawyer, and then studied and worked in numerous spots around the world before I found my true calling in games. It was really more of a homecoming: I’ve loved games my whole life, and was finally able to fulfill my dream of creating them. I started working on my own and in small teams, and eventually co-founded Thoughtfish in Berlin in 2013. We’ve developed numerous projects, including Trucify, an app based on questions that grew to have a surprisingly large and active community. Our upcoming game, Fightlings, features gameplay that updates based on the player’s context, and was nominated for the German Computer Games Prize in the “Innovation” category.