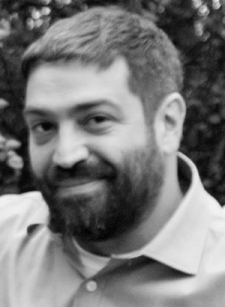 A: Generally speaking, as Executive Producer, you help lead a game and / or project through its life. From concept, to development, to launch, through live service. Development and business. You can wear a lot of hats.

Q: What are the highest profile projects you’ve worked on?

A: I have had the pleasure of working on a number of great AAA video game franchises, including, Sonic the Hedgehog, Metal Gear, EVE, Silent Hill, Geometry Wars, Castlevania, Phantasy Star, PES, DDR, Yu-Gi-Oh!, Frogger, and most recently, Underworld Overlord in collaboration with Google for Daydream. I also worked on a lot of game / multimedia projects with some incredible music artists and film / TV properties like Band of Brothers, Justin Timberlake, Tenacious D, 50 Cent, AC/DC and Beyonce.

I have basically been making games and movies my whole life.

Q: What did you do before working in VR?

A: I have been working on video games professionally for a long time, particularly at the bleeding edge of PC/console/mobile/web and things like online/multiplayer/eSports, MMO, DLC/IAP, cross-platform/game connectivity, social/community, VR/AR/etc, through to now. Before and around that, I worked on some film and TV stuff, that I got a couple of Emmy nominations for. I have basically been making games and movies my whole life.

Q: When did you start working in VR?

A: It has been a while, including work on games using tech like Move and Kinect which have progressed into the current generation of VR/AR in various ways. I was working at CCP when we got the first Oculus dev kits in, incubated EVE VR and premiered it at FanFest in 2013. Most recently, with OtherSide, we just launched Underworld Overlord, in collaboration with Google, exclusively for Daydream, as part of the release of that platform.

Back to the Future 2 was spot on in so many ways.

Q: Why did you want to work in VR?

A: I have always seen it as a near-future natural progression of human / machine interaction and an evolution of interactive media in general. All the way back to making my own games as a kid in school, combined with all kinds of media through the 80s and 90s contemplating this sort of tech. Back to the Future 2 was spot on in so many ways.

Q: Do you have a lead platform? What made you choose it?

A: No. I have been working with pretty much all of the major VR/AR platforms, among other things. There are so many iterations of hardware and standards going on and so much of that still yet to come. I recommend staying on top of the subject as much as you can. Soak it all in. That said, we target certain platforms for certain projects.

These are exciting frontiers for creators of interactive media.

A: When promising new hardware platforms and peripherals for games and apps emerge, one exciting thing to consider is what new functionality and experiences they enable. We are at the beginning of exploring this current wave of VR/AR innovations, with a good number of compelling results already, across many different industries, not only games. These are exciting frontiers for creators of interactive media.

A: People should look at the long arc of mobile for a good comparison. It is going to take a while to get to where everyone wants it to be. It is a start, it is growing, it is generating new opportunities from creative to revenue, in many different industries. There is an ecosystem, a market. With mobile, there were many competing, thrashing standards and platforms, hardware and software, for many years. VR/AR has and will follow a similar trajectory on many levels.

A: VR/AR will continue to evolve in 2017, in many cases along predictable lines, like more power, higher resolution, and so forth. We have just seen the announcement of the untethering of the Vive via a peripheral, this was sooner than many expected. The big question is when exactly VR/AR/etc will have an “iPhone moment”, a refined mainstream consumer form, mobile milestone equivalent. VR/AR/etc will continue to take incredible leaps towards that in 2017. At this rate, it will happen and it will be clear when we see it. Like the iPhone, it will be a hardware driven milestone, that needs to be backed by a solid range of great software – from OS through entertainment - that genuinely takes advantage of it.

Brandon has over two decades of professional experience with video games and multimedia. As an Executive Producer, Director and an entrepreneur, he has been a key member on a wide variety of groundbreaking projects - many of the biggest interactive media growth areas in recent history as they have emerged (mobile, multiplayer/MMO, eSports, web, education, social / community, licensing, DLC/IAP, VR/AR/MR) – for companies including Sega, Sony, CCP and Konami, with games and brands such as Metal Gear, EVE, Dance Dance Revolution, Silent Hill, Beyonce and 50 Cent. Brandon is a 2x Emmy Award nominee, produced the first downloadable music game for iPod and sat on the inaugural board of the Extra Life charity (which has raised more than $30m for hospitals), among other achievements. Brandon is a successful innovator of interactive entertainment.