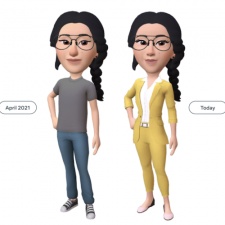 Meta is expanding its Avatar options allowing users to customize their avatars more deeply than ever before. Apparently, Meta is looking to make its avatar creation process more inclusive. Mark Zuckerberg, CEO of Meta, said in a Facebook post, “We’re updating Meta avatars with a lot more expressions, faces and skin tones, as well as wheelchairs and hearing aids.”

Thus far, Meta avatars are not yet transferable between the company’s many platforms. However, the update plans to change that, allowing users to sync their avatars between Facebook, Instagram, Messenger and Quest.

The Meta Quest, formerly the Oculus Quest, is the company’s VR headset. Currently, Quest offers users the ability to create three-dimensional avatars. A 2021 update to the systems avatar creation tools has allowed for the creation of more expressive avatars. It’s these avatars that will soon be available across the company’s many platforms.

Meta has plans for more realistic avatars in the future. As Zuckerberg stated in a Facebook post, “One day you’ll have multiple avatars ranging from expressive to photorealistic.” However, a timeline for the avatar upgrades is not yet available to the public.