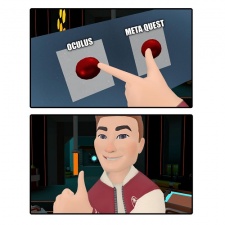 The company formerly known as Facebook has now updated the name of its Oculus account on Twitter to fall in with the corporate line and it is now… Meta Quest.

The brief Tweet just says, 'New Name. Same Mission.' with a meme. But the Twitterverse has not been kind. Roblox developer ItsODRJR summed up the consensus in just two words pretty well early on by simply saying, 'So cringe'.

One brave social media manager at Meta tried to weather the storm by replying, 'We understand our community will miss the Oculus name, but change doesn't always have to be a bad thing! We're hoping to make our ambitions to help build the metaverse more clear with our new name!'

Texan user Aliquis didn't hold back with their reply that reads, 'thank you for cementing your place as the dumbest fucking company in technology by killing off the most recognizable brand name in all of VR. people don't know what "meta", "quest" or anything else mean. they just know "oculus" = vr. might as well have microsoft kill off the xbox'.

Just to add to the corpo-cringe, the main Meta account waded into muddy waters saying, 'We're a little biased, but we dig it'.

Other comments make the point that Oculus just sounds 'cooler', while many consumers simply refer to their headsets as 'the Oculus' and both brand recognition and online discoverability will take a hit as a result.

As user FrostKittyPaw says, "Oculus is a known household brand for VR. It's near synonymous with VR, and beat out Vive to market majority. Meta is tied to Facebook/news. Why throw away a good brand?"

We just about wore out the scroll wheel on our mouse trawling through the thread looking for positive responses for balance - to no avail. No doubt Meta hopes this will all blow over soon, but it seems they may have underestimated public opinion on this one.

They just forgot one little detail...