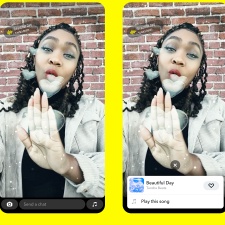 The social media firm that refers to itself as a 'camera company', Snap has announced a new deal with Sony Music Entertainment to include their artists’ music into Snap’s Sounds library.

With over 200 million Snapchatters engaging with augmented reality every day, the company has expanded the music experience on Snapchat by adding Sounds into the AR Lenses available in the Lens Carousel and experimenting with new formats.

Rolling out soon, Sound Lenses will feature a pre-selected song embedded into the Lens that transforms pictures of anyone to appear as if they are singing a song. Cameo Sound Lenses will apply visual effects to put the user and a friend as the stars of their own animated music video. To find Lenses with Sounds, look for Lenses that have a musical note icon on the Lens icon.

Snap said that, "These new Sound Lenses will make for a more immersive music experience, and open a proven and powerful way for artists to share music on Snapchat".