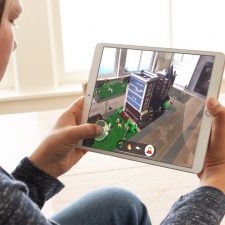 Revealed during the company’s WWDC keynote, ARKit 2 introduced shared experiences that lets multiple users interact with the same game or project A spectator mode can also be added for friends and family.

During the keynote, ARKit 2-powered game LEGO AR City showed how users could interact with the same LEGO set, add characters and vehicles, and complete objectives together in real-time.

The new Persistent AR feature meanwhile lets users interact with virtual objects and come back to them at a later time with all the objects exactly where they were left. Usage examples include finishing up a puzzle or an art project.

In ARKit 2 support for image detection and tracking has also been extended, enabling detection of 3D objects like toys and sculptures, and the ability to apply reflections of the real world onto AR objects.

ARKit 2 is part of the developer preview of iOS 12 which is available for Apple Developer Program members starting from today.

Full ARKit 2 support will launch during the autumn along with iOS 12.

This story was originally published on our sister sitee, PocketGamer.biz.