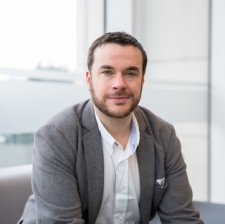 HTC has appointed Dave Haynes as Director of Vive X, Europe. The new role comes as HTC Vive expands its $100m global VR/AR accelerator program to European startups. Acting as a hub for VR/AR companies based anywhere on the continent, London will be Vive X’s sixth and newest location, alongside Taipei, Beijing, Shenzhen, San Francisco and Tel Aviv.

Vive X London is open to applications from across Europe and will visit key cities including London, Paris, Berlin, Amsterdam and Helsinki to meet potential candidates for the program.

Vive X has invested in over 80 companies worldwide across a range of strategic industry sectors including education, health, medicine and entertainment, among others. Vive X London will be welcoming a broad range of teams developing VR/AR applications and services but will be laying a particular focuson B2B and enterprise use cases in Europe.

Haynes was formerly part of the investment team at early-stage seed fund Seedcamp, where he led investments into companies including SplashVR and TheWaveVR, as well as setting up Augmentor, the first ever UK-based program for VR/AR ventures. His previous startup experience includes Berlin-based SoundCloud, where he led business development as part of the founding team.

Haynes said, “I’m thrilled to be joining the team at HTC Vive. Vive X is the most active investor in VR startups, and establishing a base in Europe for the first time is an important step. Companies here are already applying immersive technologies to solve valuable problems across sectors such as health, education, design and we’re excited to back the world-class talent that Europe has to offer.”

General Manager, HTC Vive, Europe, Paul Brown added, “It’s fantastic to have Dave onboard to launch and run Vive X here in Europe, working closely with our global Vive X team. Dave has a deep understanding of entrepreneurs and what it takes to grow an early stage business as well as a passion for backing founders from his time at Seedcamp.”