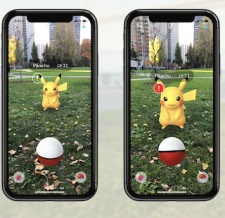 Niantic has released the AR+ update for Pokémon GO, which adds scale and awareness to Pokémon, exclusively to Apple devices.

Thanks to ARKit, Pokémon GO builds on the AR features already implemented into the game. Features include scale, which places Pokémon to a fixed point. After activating the AR+ feature in ‘encounter’ mode, Pokémon will be more accurately positioned based on their surroundings and environments, thanks to six degrees of freedom provided by ARKit. This allows players to move closer to the Pokémon and see how they’d look in the real world.

Another feature is awareness, in which Pokémon will flee if the player gets too close without sneaking. If the player successfully sneaks closer without filling up the awareness meter, there’s also the chance to receive an ‘Expert Handler’ bonus, giving gives the player extra XP points and Stardust.

As an exclusive to iOS, the new AR+ update will work with devices running iOS 11 (or later) on iPhone 6s and newer models.

AR+ for Pokémon GO is now available to download.