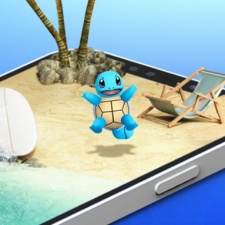 The latest Pokémon GO report from Sensor Tower has found that the Niantic AR game has surpassed $6 billion in lifetime player spending across the App Store and Google Play Store globally.

As one of the most profitable mobile games in the world since its 2016 launch, the game has continued to thrive with $1.3 billion in player spending last year and ranking 11th for consumer spending in the first quarter of 2022, bringing in $198.2 million.

Sensor Tower reports that Pokémon GO was by far the highest-grossing geolocation AR game during Q1, ahead of Square Enix’s Dragon Quest Walk and Ludia’s Jurassic World Alive in second and third respectively.

Having taken just short of six years to reach this milestone of $6 billion, Pokémon GO has pocketed the most revenue of any mobile title using the Japanese IP. Fellow titles to have hit this figure include Tencent’s PUBG Mobile and Honor of Kings, King’s Candy Crush Saga, and Supercell’s Clash of Clans.

In terms of player spending, the US ranks as the top country in Pokémon GO’s lifetime thus far, having generated 36.6 per cent of its total revenue at $2.2 billion. Japan comes second, close behind with 32.6 per cent, and Germany is third with a much smaller margin at 5.2 per cent.

Spending via Google Play accounts for 52.3 per cent of the game’s revenue, accumulating a total of £3.1 billion, but the proportion of downloads via the Play Store is notably higher at 76.3 per cent.

Between the Play Store and App Store, total downloads of Pokémon GO have now reached 678 million, and again the US represents the largest market at 123.2 million installs or 18.2 per cent. Brazil, meanwhile, ranks second and India ranks in third.