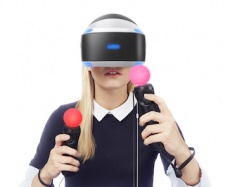 With triple-A games like The Elder Scrolls V: Skyrim VR, GT Sport and the upcoming DOOM VFR arriving on the PS VR, sales were expected to increase. However, it was the offers discounting up to £100 off the hardware that accelerated sales of the headset to the number one spot on Amazon.

Following news that more than a million VR headsets shipped in Q3 of 2017, it’s clear that the PS VR has been significant to that number – shipping 490,000 units. Black Friday sales are certain to propel this figure even higher, after sales saw an increase of 46,700% on Amazon’s site-wide sale charts. That means the PS VR was the best seller among all products available via Amazon’s online store.

Head of PlayStation, Eric Lempel, said in an interview with CNBC that the company had its, “Biggest Black Friday… we sold more consoles than we ever have in our 22-year history.” He continues by saying “PlayStation VR is unlike anything else anybody’s seen… Consumers love the big immersive games... and there’s a lot more to come”.