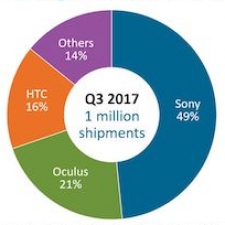 Virtual Reality headset shipments are showing no signs of slowing, as the quarterly total exceeded 1 million units for the first time in Q3 2017, according to new data from Canalys.

Sony took the lead, shipping more than 490,000 PS VR sets in Q3, followed by Oculus, which shipped 210,000 of its Rift headsets. HTC took third place, shipping 160,000 Vive VR units. Collectively, Sony, Oculus and HTC made up 86% of the total market in Q3 2017. Oculus increased shipments of its Rift headsets by cutting the price to $399 for a limited time, matching that of the PS VR. The positive results of the Q3 summer sale prompted Oculus to permanently lower the price of the Rift to U$399 in November.

Canalys Research Analyst Vincent Thielke said, “VR adoption in the consumer segment is highly dependent on price and Oculus’ strategy of lowering prices has definitely helped drive adoption.” He went on to explain that incumbents and new players entering the market are targeting similar price points saying, “Hugo Barra is betting on his next product, the US$199 Oculus Go standalone headset, to reach more users next year. The Go will excite first-time users, but driving adoption beyond social media will be a challenge.”

In Asia, Japan’s unique gaming and entertainment culture has helped VR adoption. VR in Japan has benefited immensely from the emergence of VR experience zones across the country, such as in Shinjuku, Tokyo. Japanese consumers enjoy living their fantasies in VR, a trait that stems from their anime and gaming culture.

Canalys Analyst Jason Low said, “Sony is well placed to take advantage of this increasing interest in VR. Sony has dominated the Japanese VR headset market since the release of the PS VR, taking more than an 80% share, and will continue to lead as it increases supply of the PS VR headset with bundles featuring new titles from popular franchises, including Doom, Skyrim and Gran Turismo.

The global VR headset market is expected to gain a sizeable boost in 2018 from new entrants supporting Microsoft’s Windows Mixed Reality platform. Low said, “VR in business can be applied to many industries, such as manufacturing, healthcare and education. As top-tier PC vendors, including HP, Lenovo, Acer, Asus and Dell, launch their own VR headsets, using their distribution channel efficiencies, one can expect a strong VR uptake in business.”