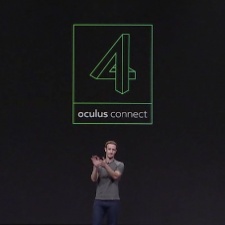 Today’s keynote from the Oculus Connects 4 live event at the San Jose McEnery Convention Center was absolutely jam-packed with VR goodness. Here are the highlights...

Facebook CEO Mark Zuckerberg opened proceedings with a defence of VR saying that, “Technology can seem too crazy or complex to start”, before likening it to the advent of broadband or the smartphone.

Answering criticisms that VR is isolating he said that, “It’s the opposite; it’s freeing”.

Saying that, “We have to find the sweet-spot in the middle of affordability and quality”, Zuckerberg announced the all-new standalone headset, Oculus Go. It’s Gear VR without the need for a smartphone that he called, “The most accessible VR experience ever”. The $199 hardware will ship early next year.

Barra disclosed the standalone ‘Santa Cruz’ hardware will feature new controllers, based on Touch that take advantage of the headset’s internal sensors.

Nate Mitchell, Head of Rift revealed Core 2.0 that integrates the Universal Menu and Oculus Home. The 3D overlay can be brought up in any app.

Product Manager, Christina Womack, demonstrated how MultiView can lower CPU draw calls by up to 40% framerate.

She also showed Oculus Avatar 2.0 with new skins and customisability.

Social blocking will be available across apps.

Chief Scientist Michael Abrash considered that VR, “Will be a primary way we connect”.

On the oft-requested ‘killer app’ for XR, Abrash said, “What’s the killer app for reality? It’s all the things you can do”.