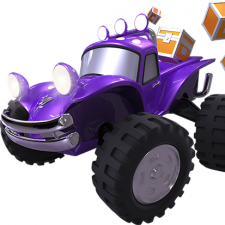 A one-button-controlled, third-person racing game, the objective in Cargo Racing VR is to reach the finish line as quickly as possible without losing the truck’s cargo. The game has nine playable tracks with more to come soon, unlockable paint jobs for the accelerate-able truck and online leaderboards.

Bringing VR To The Masses

Virtual Arts came out of stealth in July, before revealing Cargo Racing VR at Gamescom the following month. It’s out now, priced £2.29.

This low price and the single-button control scheme is further evidence of the studio’s ambitions to “Bring VR to the masses,” as CEO, Nizar Romdan, explained to us in an interview.

Marketing Manager - and VR Indie Pitch judge at XR Connects Helsinki - Ryan Booth explained further, “Cargo’s a game with a one-button control scheme. This enables players to jump straight in as a casual experience and enjoy having a race.

“The skill that builds on top of this will become evident to players as they scale the online leaderboards – the way you take one corner will set you up entirely differently for the next.

“Only through using the unique view in VR can you get a heads up on what’s round every corner!”

Cargo Racing VR is now available for £2.29 on the Oculus Store.