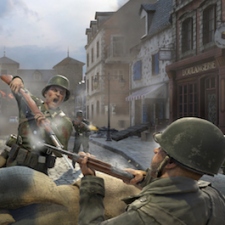 Vive Studios, the VR content development and publishing initiative from HTC Vive has launched its WWII FPS, Front Defense. Developed by HTC first-party studio Fantahorn Studio, Front Defense is a fast-paced arcade-style shooter designed explicitly for Vive’s room-scale VR. The game is set in the final days of World War II, immersing players in the role of an Allied Forces hero defending a fictional European town from a relentless onslaught by an Axis armoured division.

“We’re thrilled to bring VR game players one of the most immersive shooting games they’ll ever experience with Front Defense,” said Joel Breton, Head of Vive Studios. “Our internal development team at Fantahorn Studio has created an unrivaled VR experience in this highly-polished arcade shooter putting players in the boots of a WWII soldier. From its cinematic opening, Front Defense makes the case for VR as the ultimate platform for hardcore gaming, delivering a thrillingly real war shooter where the only missing components may be the smell of gunfire and mortal danger.”

Front Defense premieres today on Viveport for $19.99 USD or as part of the Viveport Subscription library. A Steam release will follow in mid-July.