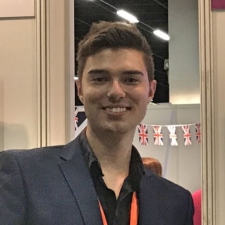 Virtual Arts, the new immersive entertainment company founded in Cambridge this summer, unveiled its first game at Gamescom in August. The Virtual Report had a chance to play it with Ryan Booth, marketing manager, and CEO Nizar Romdan.

Cargo Racing VR is a mobile VR racing game designed to be easy to control. In keeping with the company's vision, it's an accessible game with a low barrier to participation, but one that rewards practice and delivers a polished gaming experience. The team, founded mostly from former members of ARM and Sony Guerilla, is on a mission to create VR experiences that squeeze the most out of entry-level devices.

You are racing a truck round a track as fast as possible. Your only input is to control the speed by pressing or releasing the accelerator. The vehicle steers itself, but go too fast and you risk sliding off on a corner or spilling the eponymous cargo. With a bit of perseverance, it's possible to perform slick manoeuvres, like drifting round the tightest bends at speed. And your perspective is top down, godlike, rather than first person. We asked Ryan Booth to explain the game's philosophy to us.

TVR: What makes the game special?
Ryan Booth: Cargo’s a game with a one-button control scheme. This enables players to jump straight in as a casual experience and enjoy having a race, while keeping as much cargo as possible in the back of the truck for the finish line.

The skill that builds on top of this one-button design will become evident to players as they scale the online leaderboards – the way you take one corner will set you up entirely differently for the next. To work out how to beat someone’s time, you’ll have to consider your approach to the whole track not just each corner/obstacle on its own. Only through using the unique view in VR can you get a heads up on what’s round every corner!

You can complete nine tracks on launch, play against your friends' best times and unlock custom paint jobs for the car.

So how does this new game represent your vision and philosophy?
We see the VR market as a growing market; we appreciate that for some people Cargo may be their first experience in VR. Our vision for a world where everyone has access to readily available and easily disposable VR headsets is reflected by the short and snappy gameplay of Cargo, you can complete one track and pass on the device to a friend or simply enjoy the game casually throughout the day.

As a project, Cargo Racing VR was essentially designed to allow the newly formed Virtual Arts content team to work together on a project and demonstrate that it has the capability to deliver high quality content within budget and on deadline - the whole project was completed in two and a half months.

Why did you opt for a third-person perspective instead of first-person?
The third-person camera view came from our comfort testing in VR. We found the majority of people felt less comfortable when travelling from a perspective behind the car as they felt pulled forward. When we tested a side-on-view, not only were people more comfortable but it unlocked a key aspect of Cargo’s gameplay, the ability to look ahead and plan your acceleration and deceleration for what’s ahead. We then built on this idea to add to the gameplay mechanics which ended up in the final product of Cargo.

Why unveil the game at Gamescom? And what feedback did you get from there?
We took Cargo to Gamescom as it’s the biggest showcase of indie and upcoming games in Europe. We had a great opportunity to work with UKIE on their booth at the show and we were keen to show off the game for the first time to the Western market.

We were really surprised by how positive the feedback at the show was. We had some of the best feedback from people who hadn’t used VR before and those who had been exposed to early negative VR experiences before. This proved the casual and comfortable approach was best; we’re excited to see many more of these users adopt VR, AR and MR and enjoy the content coming from Virtual Arts.

Thanks to Ryan Booth for talking us through the Cargo experience. You can read an interview with CEO, Nizar Romdan, as he expands upon Virtual Arts' mass market philosophy here. Full disclosure: Romdan is an advisor and contributor to The Virtual Report and our sister site PocketGamer.biz.

You can get more essential insight into the world of VR gaming and meet key industry representatives at our upcoming conference, XR Connects. It takes place in Helsinki this month, 19-20 September, and tickets are available now.