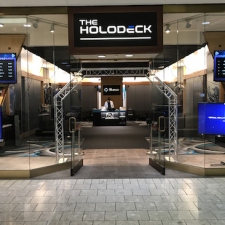 Founder, Ted Fuchs said, “We wanted to focus on technologies that provided a virtual experience blended with the real world in order to provide a truly and physically social atmosphere where gamers weren’t isolated in their own worlds. The Hololens was the natural choice, as we believe the future of arcades, whose very nature is location-based gaming with others, must be Mixed - and not just Virtual - Reality.”

As well as being available to the general public, there are also facilities dedicated to developers. On-site ‘DevPods’ enable independent devs to test and grow their ideas on hardware that may not otherwise be affordable. A Day Pass, including access to a DevPod, costs $40.

Fuchs is keen to encourage developers towards XR opportunities saying, “We want to be on the forefront of helping others realise this same future, by providing access to the tools and hardware necessary.”

The Holodeck is already looking to expand into a franchise, with a second location due to open on 9th October at the Palisades Center in West Nyack, NY.