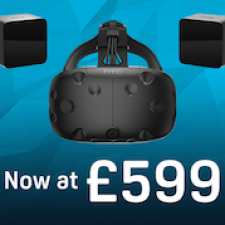 HTC has just reduced the price of its Vive hardware to £599 in the UK and $599 in the USA. The lower price point is a permanent reduction of £160/$200. Every Vive bundle includes the headset, two base stations, two motion controllers, and improved connection cables. The discount is likely to have been made possible in part through the use of, ‘New materials that offer a lighter weight on the Vive headset’.

All Vive purchases also come with a free trial to Viveport Subscription – see what our Focal Point panel made of that service here - plus games including Tilt Brush, Everest VR, and Richie's Plank Experience.

Cher Wang, Chairwoman at HTC said, “Our goal at Vive has always been to offer the best and most advanced VR system and drive mass market adoption for VR across the globe. We’re continuing to deliver on that commitment with this new price for Vive, making VR more accessible to a broader audience and driving the entire VR industry forward. There has never been a better time to embrace Vive.”

The General Manager for Europe, Paul Brown added, “Reducing the price of Vive during a key purchasing season we believe will significantly boost VR adoption to bring in even more consumers and content creators to Vive. We’re focused on delivering both great value together with the best VR experience on the market and we’re excited to lead the way in bringing VR to the mainstream.”

If the Vive’s new price is still too strong for your budget, HTC also offers a finance package of £27.50 month at 9.95% APR Representative. You can also rent Vive for £89.90 month through HTC’s partners at Grover.

While the surprise price drop will attract new users at £599, the Vive is still £200 more expensive than Oculus’ Rift and Touch bundle at £399, announced last month as part of its Summer of Rift sale. And here’s our Focal Point panel again on that topic.

While HTC has previously stated, ‘We don’t feel the need to cut the price of Vive’, has this apparent 180 been prompted by HTC seeing its market share shrinking as a result of the Oculus promotion? Dan O’Brien, General Manager for HTC Vive in the Americas, denies this is the case, telling UploadVR, “We plan out our pricing and margins and life cycle planning a year plus in advance. This is us executing a long-term strategy plan to get to the point in the year when consumer dollars are spent more heavily on consumer electronics”.

Whatever the motiviation behind the decision to offer the Vive hardware at a lower price point, this can only be good news for the consumer - and the industry as a whole.