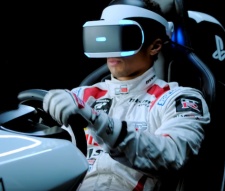 PlayStation has released a short trailer for its forthcoming flagship PS4 racing game, Gran Turismo Sport, showing off its VR mode. The trailer features comments from GT Academy winners and Nissan Pro Drivers who offer their thoughts on playing the game in VR.

Ricardo Sanchez said, “You feel you are there”. Jann Mardenborough proclaimed GT Sport in PS VR to be, “Next level stuff”, explaining that, “You can look at apexes so far in the distance”. He believes that PS VR players, “Could actually improve your race vision using VR”.

The video shows track racing at iconic circuits such as Brands Hatch, as well as rally stages. Mardenborough explains that he can look through the side window of a rally car as it travels sideways, before looking back through the windscreen as the car regains traction saying, “Everything transitions as it would in real life”.

It looks great, but we’re a bit confused by the trailer. Series head Kazunori Yamauchi himself has previously said that VR mode is limited to one-on-one races on certain tracks. Even though a very faint caption on the trailer reads ‘PlayStation VR support on select cars and tracks’, the clips clearly show a full field of cars with the strong suggestion the footage was captured in VR mode, based on head movement.

Either Yamauchi-san was mistaken, or Sony might be setting itself up for further claims of misrepresentation and false advertising, much like it did in 2016 with indie-hit-in-the-making turned high profile flop, No Man’s Sky.

Watch the video for yourself:

The Most Accurate Simulator?

Pro Driver Sanchez said, “This is what you’re looking for to have the most accurate simulator”. In the years since its 1997 release after five years of development, the GT franchise has been branded as ‘The Real Driving Simulator’, but the market has moved on in those 20 years and we expect VR racers will find Project CARS 2 has something to say about that when it’s released on 22nd September – a month before the latest in the GT series lines up on the grid on 17th October.

We can’t wait to put these two racing titles in a VR-to-VR race for ourselves...