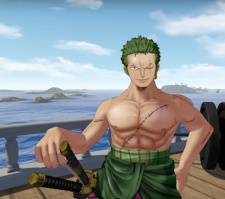 Moving from manga to anime to VR game, One Piece: Grand Cruise will launch exclusively on the PS VR.

One Piece: Grand Cruise allows players to embrace their inner-pirate; battling classic villains from the series, completing training challenges with other members of the Straw Hat Crew and shooting cannons at a giant kraken will feature in the game.

Using the same art style as the manga and with 360-degree vision, fans will be able to immerse themselves in the world of One Piece for the first time.