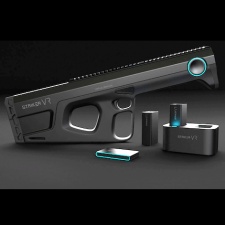 Striker VR has opened pre-ordersfor its Arena Infinity peripheral; a full-sized futuristic bull-pup style rifle. The ‘base’ package costs an eye-watering $2,800, with an additional $100 for either the Optitrack Active or Vive’s puck tracking systems.

Included in the bundle:

The Arena Infinity itself features proprietary virtual recoil, featuring fully adjustable haptics; touchpads, buttons; and a standard picatinny rail for accessories and alternative tracking hardware. Striker VR don’t hold back on its claims for the gun saying, ‘Categorically the best in its class, the Arena Infinity combines a revolutionary and state of the art haptic engine to deliver powerful as well as precise tactile feedback.’

Striker VR expects to start shipping in Q3 this year, with orders being filled in the order they are placed.